From Buenos Aires it was – yes – another overnight bus ride to Mendoza. Mendoza is the heart of the Argentinian wine industry, and mostly famous for Malbec, the lovely red wine that goes oh so perfectly with a steak.

The first day we just pottered around the town which was quite pleasant. It’s not that big, so in the afternoon to kill time we visited the ‘Serpentarium’, a weird place with all kinds of Sth American snakes.  This was just to give ourselves a little fright in preparation for what we might encounter in the jungle 😉 On day two we caught the bus out to Maipu, around 40 minutes from Mendoza which is where all the vineyards or bodegas as they are called in Spanish are, and where a lot of Argentinian wine is produced.

We rented a couple of bikes from ‘Mr Hugo’, a guy who has a little stall outside his house, and armed with a map we spent the day cycling around the area going between the different bodegas. The first stop was an interesting wine museum, which had all kinds of artifacts from winemaking over the centuries. We did a couple more tastings, had lunch, followed by another tasting (yes we were getting a wee bit wobbly on the bikes by this stage!), and to a final stop at a liquer and chocolate tasting. Mike in downtown Maipu. Check out the rusty old truck in the background – this is what most trucks in Argentina are like!

Mendoza is surrounded by the spectacular mountains of the Andes, so the next day we had booked to go on a ‘High Mountain’ trip which would take us right up into the Andes to some ski fields and to the border with Chile, with great views of Ancongua the highest mountain in Sth America.

Unfortunately, the weather was terrible – pouring with rain, freezing and then it started to snow. We drove in the van to a town called Uspallatta (where 7 years in Tibet was filmed), and sat around in a cafe for a couple of hours to see if the weather would clear. To compound things, there had been a major rockslide on the mountain road which had completely blocked the road, and the police were turning people back.

So our tour company reverted to Plan B which was to hire some gear so we could go tobogganing in the snow at another place where the weather was better. It was absolutely freezing and snowing, but we had a lot of fun. Kitting up for the snow 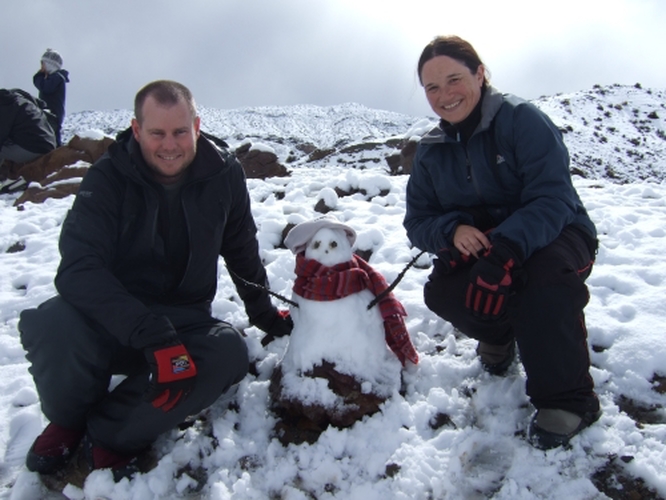 Typically on our trip back to Mendoza the weather cleared, and we got a tantalising view of what the views would have been like. Oh well you can plan everything but not the weather! No, not the South Island of NZ, but a lake outside of Mendoza!

On our final day we had booked to go horse riding in the mountains, and again the weather let us down. The horse riding was great fun, but it was absolutely freezing. We had booked for 2 hours but ended up going on a 4 hour ride, so there were a few numb bums at the end of it. We warmed up at the end of the ride with a great asado (Argentinian BBQ) and more yummy Malbec wine.